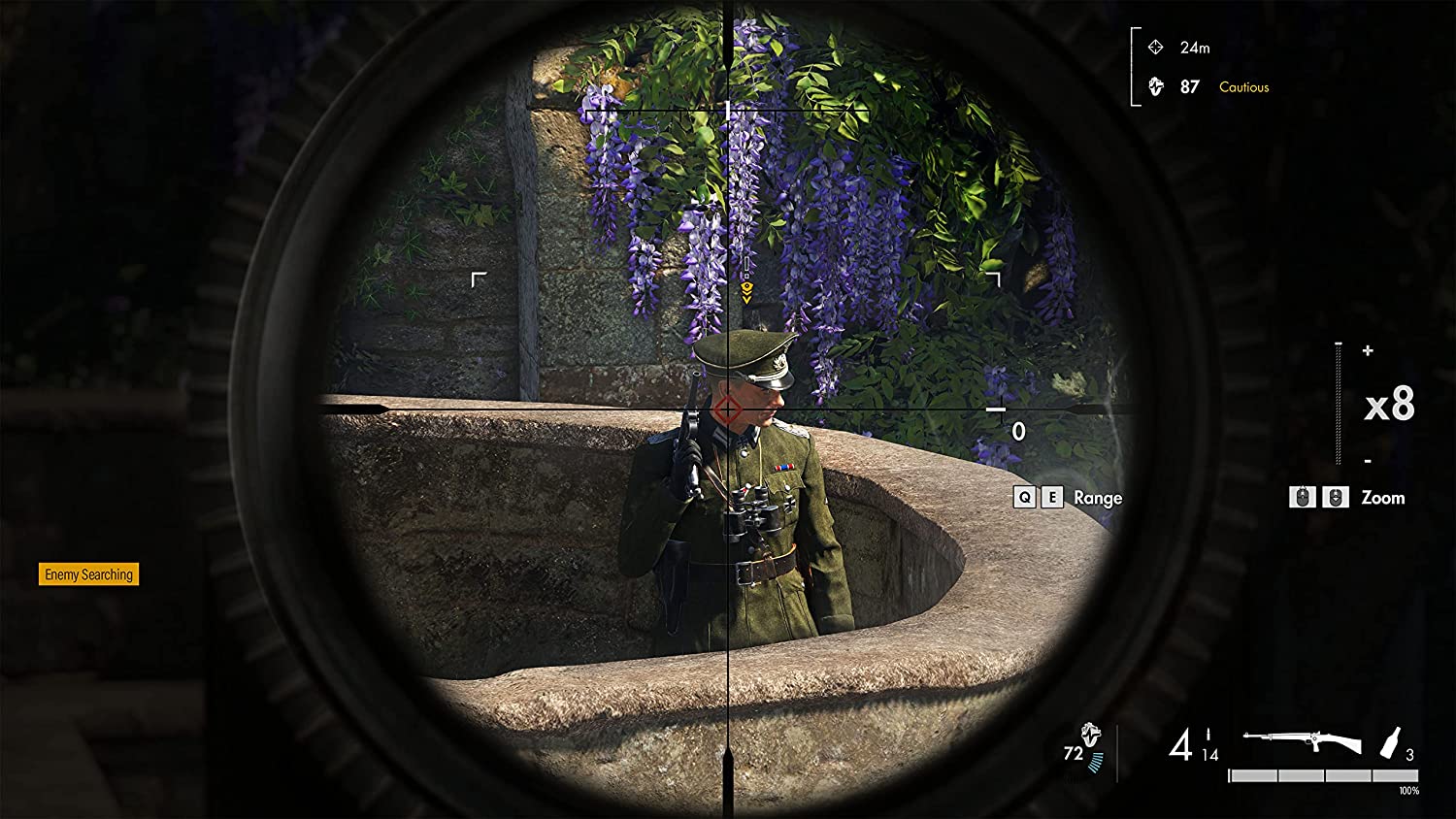 So when last did you play a sniper elite game? The last release was back in 2017 with Sniper Elite 4. Now this year we have Sniper Elite 5, the latest release of the sniper elite series in 2022. It promises to be fun, with more customization options and other gameplay features. Let’s see more from the review.

You once again play Karl Fairburne, an elite sniper soldier who’s on a mission to uncover a top-secret project by the German Nazis called Operation Kraken. For those who are new to the series, it’s a third-person espionage/shooter where you use the environment such as load noises to kill your foes using your trusty sniper rifle.

There’s a lot waiting for you to experience in this game, which includes:

The overall story took me about 20 hours to complete, and even more if you replay the missions to uncover and unlock missed objectives and rewards.

My favorite aspect of the game is the immense gameplay and overall graphics of the game. It’s fun to kill Nazis soldiers and see their bodies taking damage from the bullet passing through their heads, or rupturing their hearts or lungs or other body parts. Note the game is rated M for mature with a 17+, so it’s definitely not for kids. If you wanna see more, check out the gameplay clip.

The best thing about Sniper Elite 5 is the gameplay, from the spectacular and gory sniper kill cams to the fluent movements of our sniper protagonist. The sniper kills look even more spectacular on the PS5. They are surprisingly detailed and fun to watch. If it’s too gory, you can easily disable it in the options menu.

He has abilities at his disposal, such as a Focus ability (much like Last of Us) where you can spot enemies through walls, and also find tools like crowbars, bolt cutters, and satchel bombs to use during missions. You can even upgrade your skills using a 3-tier skill and learn new abilities such as increased health, equip more items or increase in ammo slots, or even move quicker while crouched in Focus mode.

Our protagonist, Fairburne, is more enjoyable to control since he is now more agile and daring than before. Despite the fact that every stalk through a heavily guarded area begins with a silent crouch-walk, once the noise level increases, you are now capable of moving quickly over low walls and through windows, gaining some distance with a zipline, climbing vines and rope netting, or sliding down slopes to break the line of sight and regroup for a counterattack.

The open-level design generally made it such that I was less of a sitting duck and more of a sniping Spider-Man, even if there were times when I was forced to shoot my way out with my back to the wall.

The real shooting experience is much the same as in Sniper Elite 4. To bring these Nazis to a bloody end, you may still use binoculars to identify your targets, modify generators to mute the sounds of your gunfire, and take advantage of natural dangers like exploding barrels. Additionally, Sniper Elite 5 contains more unsightly headshots thanks to the X-ray kill cam that looks shockingly more realistic.

Each stage’s distinct assassinations are significantly more memorable, even if they occur accidentally. Instead of killing a target with your sniper rifle, you can also release and drop a chandelier from the ceiling or dip poison into the target’s drink and watch him die from it.

Killing targets with these actions reward you with more weapon customization options when next you find a workbench. Nevertheless, I appreciated the chance to engage targets with my holstered weapon, and I wished each map included more than one of these distinctive targets.

One disappointing thing to note is that objectives in one mission tend to be recycled into the next. I can’t remember how many times I had to lay satchel charges on AA guns, snap wires to knock down radio towers, or flip similar sets of pressure valves to shut down several industrial facilities. Once I saw how identical all of Sniper Elite 5’s side objectives felt, I lost interest in completing them all.

The game graphics look good overall. From the grounds and extravagant interior of the ‘Chateau de Berengar’ mansion to the majestic cathedral atop a heavily guarded spy academy to the depths of the menacingly molten production areas of a Nazi war factory, Sniper Elite 5 is home to some truly expansive architecture that are each fascinating to explore.

There are certainly some amusingly lighthearted surprises to stumble across along the way, despite the nonstop killing and 2nd World War themes. I especially enjoyed pausing to hear and observe a group of Nazis struggling to learn how to speak like Americans — before I crept up to assassinate them.

I was able to try out both the new counter-op Axis Invasion game and the campaign co-op in multiplayer mode. Co-op synchronized kills are just as much fun as they were in Sniper Elite 4, but this time you and your teammate can work together a little better since you can exchange ammunition, medkits, and other mission-specific goodies like special room keys.

There is no doubt a compelling case to be made that playing Sniper Elite 5’s campaign in a two-player co-op is another great option.

The Axis invasion option, opened up new multiplayer options, such as playing as a Nazi sniper. Instead of using binoculars like the other player, the invading sniper may command other AI foes to temporarily increase their awareness by telling them to “look sharp.”

Although it would be convenient to be able to take a lift in one of the transport trucks that constantly roam around many of the maps rather than have to walk everywhere, based on the small taste I’ve had so far, I’m definitely eager to try out the mode more after launch. The sheer scale of Sniper Elite 5’s maps can make it difficult at times to track down your target.

Sniper Elite 5 is a lot of fun. The gameplay is smooth and quick but it’s not a perfect game. There are minor glitches in the game such as enemy AI appearing stuck in walls, and stage objectives done but not being tracked. But these can be resolved with updates, as soon as you get your copy I recommend you download and install the latest update of the game.

If you’re looking for a great storyline then you won’t find it here in Sniper Elite 5. It’s not that it’s bad, it’s just that the story is not engaging enough for players to really enjoy it (unless you like to see historical videos of the 2nd World War). The game cutscenes are satisfactory. The actions and voice acting are not groundbreaking but it’s there at least. Rather stick to enjoying the gameplay because that’s the main strength of Sniper Elite 5.

Sniper Elite 5 feels like the series needs to start setting its sights a little higher and find ways to avoid repeating the same handful of objectives so frequently. The story isn’t really engaging and there are minor but noticeable glitches.

But with Fairburne’s upgrade in agility and abilities, improved gameplay and co-op, weapons customization options, and the Axis Invasion multiplayer mode, Sniper Elite 5 is a satisfying game that still holds 1st place for grossly killing Nazis from headshots down to their nether regions.

So what’s your opinion of this game? Is it worth picking up? Please leave your comments below, and if you have any questions then leave them below as well and I’ll get back to you as soon as possible. If the Sniper Elite 5 grabs your interest, then do yourself a favor, click the link here or the button above to learn more about it, and purchase it if you want.